The Wikipedia for Schools project got a small but incredibly helpful mention in Hindustan Times, Mumbai, on Sunday 13th Feb 2011 !

See on the far right under "Pune" !
Click here to see the article on HT website.
Special thanks to Radhika Raj, journo at Hindustan Times!

Here's the text:
Pune Wikimedians are compiling CDs of select English Wikipedia articles for free distribution to schools across the state that have no internet access. Last month, an early copy of the CD was handed over to a municipal school in Pune as an experiment. "The students had never seen an encyclopedia before", says electrical engineer Nikhil Sheth, 25, the man behind the project. "Some logged on to read about the history of the Taj Mahal, others started exploring pages related to animals."

>>I'm extremely grateful for the publishing, but, well... don't expect a newspaper to have full accuracy when they have to economize on words... also they have to write it for the layman... so here are some corrections, though perfectly understandable I have to share them...

The pic was taken in Shantabai Ladkat School, Nanapeth, Pune - the first school where I installed Wikipedia for Schools. In the pic it's loaded on Teach For India Fellow Kaushik's netbook; After demo'ing it there, I'd gone and installed it in the computer lab. Here's the original: 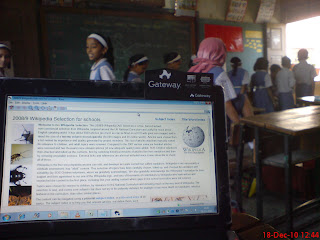 Want to get in on the action? Browse over to http://tinyurl.com/WFSOE, sign up and join the movement to empower schools across India and the world!
Posted by Nikhil