How many deal-breakers does it take to break a relationship? 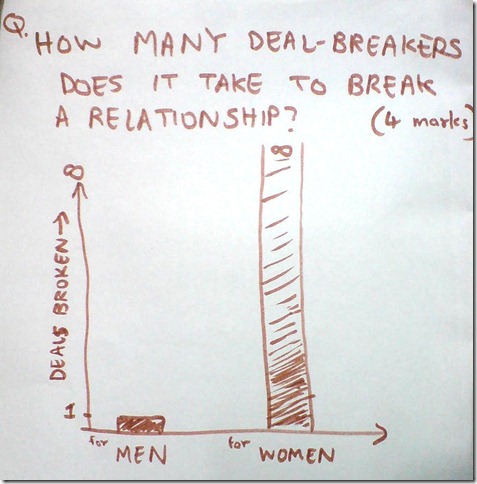 Got a feedback from some female friends saying “So True!” What do you think?

Further, what do you think should change, if anything?

What, and Who, causes War? And what can stop it? 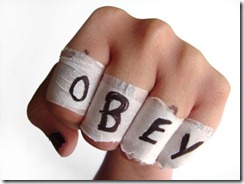 Any philosophy that tells people to transfer over their powers of decision making, judgment and thinking into the hands of any external authority and to believe and go along with what they've been told by the authority without questioning;

Any philosophy that glorifies this,

Is going to lead to war.

Because that is exactly what a war needs to be able to happen.

The switching off of the independent thinking powers of the majority of the people.

If a religion is that philosophy that tells you to do as someone on top tells you, then the religion will cause war.

But it doesn’t need to be religion per se – it can be a political dogma, a technocrat doctrine, a corporate ethic, a community decision, a cult personality – anything. Anything that makes a few people or just one person believe they have all the answers and everybody else blindly trust that person or select people.

It is hence also possible for a movie star whom everyone loves exceedingly, to cause a war. Or a group of highly educated PhD’s who think they with their high quality brains can solve all the problems. Or a bunch of so-called scientifically driven process-oriented multinational corporations.

Such philosophies and groups and persons are there all over the place and any one of them can take over a community, a country and lead it to its doom.

So with this threat comes a ray of hope – the presence of a counter-philosophy that advocates for people to NOT give up their independent thinking ability, can act as a deterrent to war.

This counter-philosophy can also come from ANY source. The essential thing is that it must ask people to take back their powers of thinking and judgment and not blindly believe anybody.

It can be a religious institution, or a person, or any group of people, even just a theory. Or heck, even a bunch of kids. It can even be multiple sources independent of each other telling us the same thing, since here the core message is to NOT allow any limited entity to take over the collective mind.

But one thing is for sure : You cannot end war by replacing one authoritative philosophy with another. Repeating the same pattern that got us into a problem is not going to take us out of it.

So stop dreaming of that noble leader or leadership who will have all the answers, who will one day rise to power and put an end to all our problems. Ain’t gonna happen, buddy.

Complicated behavior of women, or a symptom of a sick society?

Wanted to express something about … oh, cut the intros and let’s jump in.
Lots of talk all over the place about women being inherently crazy, proverbs about “don’t try to understand women”, about no one can tell how a woman’s mind works, etc etc.

Bullshit. If we can tell the chemical composition of the atmosphere of a distant planet just by looking at it and paying attention to detail, in this case too if you really go into the matter, analyze everything closely and pay close attention then you can begin to understand the fairer sex as well. I’m not saying anything about prediction or manipulation – My focus is to really understand someone, why they are the way they are, why they do what they do.

Irrational behavior of women is not because they're "wired this way". It's not "in their nature". Gentlemen and ladies, get this false myth out of your system.

It's just one more symptom of the sick, horrible state of our society and the way it treats its women. This includes the way its members, including women, treat each other. 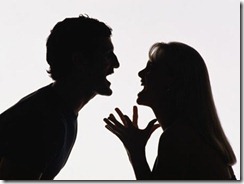 As is the nature of disorders and symptoms, the receivers of irrational and torturing behavior that women are known to put people through (“emotional atyachaar”) are usually not the ones whose actions caused it. It takes a long time for the hurt to set in and disturb things, in some cases it spans entire generations. (alright, men behave badly too. But women are the mistreated ones here, as a result they exhibit this more.) So it is an inbuilt feature of this system to :
1. get women hurt by men or women,
2. then have them hurt men or women who are not at fault (and this little slice of the whole chain is what gets picked up and made an issue or mockery of in our media) and hence propogate the chain.
So if we really want to put an end to this madness, we’re going to have to put an end to ours. Men, you have to stop treating women like objects and property. A person is a person. Accept that and move on. Stop connecting your male ego with whether or not a woman is under your control.

Stop the obsession with Loyalty
Loyalty should be to a cause, not to any person. Because people can change. This applies to relationships too. Why this obsession with loyalty? From what I see, the only thing the loyalty concept does is make the guy lazy and retarded and lost most of his good traits out of a comfortable sense of security, and trap the woman with a guy whose quality drops meteorically. And then they sit and cry about “he’s no longer the loving, caring person he used to be”. In some cases this leads to seeking out extra-marital love. When that gets caught, everyone wants to blame the cheater, the traitor, the betrayer, the unfaithful. But hello, was the cheated spouse even worth being loyal to?
This even happens on the macro level – organizations and countries, once sure of full loyalty of their people, then inevitably go and do the most hideous of things with impunity because of this notion of security that loyalty gives them. Anyone who dares to question the actions of the people at the top, is then branded a “traitor”, dis-loyal to the whole institution. In families and communities, this obsession with loyalty leads to honor killings, domestic violence (nothing "domestic" about it, FYI) and a whole array of mental torture and emotional blackmail. This is my perspective : It is the same false notion of being loyal to fallible human beings that dooms relationships, organizations, whole nations.

This invites a lot of flak from people who don’t really get the difference between loyalty and commitment. So the obvious rebuke here would be “Oh, so you’ll abandon your commitment? Where is the honor, the ethics in that?”

People, there’s a HUGE difference between loyalty and commitment. Stop mixing the two. Stop justifying loyalty in the name of commitment.

Dictionary meanings:
Loyalty: Giving or showing firm and constant support or allegiance to a person or institution

Commitment: A binding exchange of promises
Get the difference? In a commitment, both parties need to remain true to their promises. Both parties are accountable. If one fails to live up to the commitment, the other is empowered to walk away. There is accountability. Loyalty puts the whole burden on one person while making no room for accountability from the other.

Wow, loyalty Vs Commitment is a topic in itself! Will have to branch out here. (will update this line with a link when its ready)

To put it in short, a committed wife would leave an abusive or in any way unworthy husband. A loyal wife would keep suffering in silence. A committed person would identify and act proactively to remove the problems afflicting her. A loyal person would keep turning a blind eye, get afflicted by the problems and let them manifest themselves in her irrational, illogical and damaging behavior. By glorifying loyalty, we are insulting all the independent thinkers and doers out there, and paving the way for really screwed up mentalities across the board.

Update: Watch this guy's TED Talk to know precisely what is wrong with the man-box that men around the world have boxed themselves in: http://www.ted.com/speakers/tony_porter.html

This isn’t going to be easy or quick; it might take a whole generation for the damage to wear off. But let’s try to give our kids and their kids a better life. No one deserves to be subjected to this contorted, soul-destroying treatment that we today generalize by telling the women that “it’s a man’s world” and telling the men that “women are complicated”. We’re both getting hurt, let’s stop this.

Tip: To get informed about Nature Vs Nurture, Watch: The first part of the movie “Zeitgeist: Moving Forward”
Posted by Nikhil 8 comments: