Monsanto has been traced and pinned by farmers rights and human rights organizations worldwide as the single biggest culprit behind the Indian farmer suicides.

And not through free market economics : the Indian govt used taxpayer money to subsidize Monsanto's BT cotton and the associated fertilizers and pesticides;

and to make costly dams to (claim they will) supply the extra water needed by cotton, sugarcane and such cash crops.
There is simply not enough water falling on the Indian subcontinent to mass-grow cotton and sugarcane sustainably: simple fact.

They compelled the farmers to switch over to cash crops where they were growing enough food to feed themselves earlier.

Then the dams ran dry, the subsidies disappeared,

Monsanto hiked the prices on its seeds exponentially (what we call as copyright and royalty fees),

subsidies to textiles were removed (while tax holidays for major IT companies were preserved..),

the international prices of textiles fell (people don't really need to buy new clothes everyday, and with the global recession that consumerism was reigned in) >> cotton sales prices fell. And now the Indian farmer was spending more per year than what he was getting. Even sugar prices have had to be fixed artificially to prevent them from crashing.

Instead of telling them to switch back to growing real food, the farmers were pushed to take loans; banks reached all villages to facilitate lending, regulations were relaxed to give to more risky borrowers. Gold loans were promoted (even film stars advocated and spurred it).. with the undeclared knowledge that they'll never be able to buy back their gold. At some points loan waivers were also offered.

Microfinance was promoted on a massive scale and there too fraudulent NGOs ripped them off.

Satellite TV was spread to farthest reaches through generous discounts; and through television the farmers were bombarded with expectations of high-cost college education (which became a profiteering business, far from any noble intentions), lavish weddings, costly home refurbishments, petrol-consuming vehicles, in-home toilets, the whole delusion of development, to attain which, the farmer had no choice but to stick to using his land to grow cash crops instead of the food that could have fed his family.

As less lands were used to grow food, and more and more food needed to be bought, food shortages started, kicking up prices and they're still rising exponentially. Have you been to the sabji-mandi lately? Do you know anyone or any org that's even keeping track of how much the prices of basic foods have risen?

All intervention only makes more problems. The best thing that can be done right now is to actively remove the effects of all interventions.

They don't need intervention : They need de-intervention. They know how to switch back to growing enough food to feed their families. They need the space and the absence of other (false) promises, the scaling back of government advocacy and expectations and knee-jerk measures, to figure it out on their own.

Stop the intervention : the farmers will stop dying.

what does an iron hand finally get you?

Interesting conversation...
Shared by an acquaintance on FB..

i m looking for gr8 defenders of paid human rights & paid intellectuals
who r making a martyr out of Ishrat Jahan.... I want to ask them simple
questions: r they also paid by Pakistan or Saudi Arabia or r they
looking for some awards or recognition or funding from anti-nationals?
anti-nations have organized multiple peace marches, candle marches and
campaigned heavily in India & world... I can undoubtedly say that they
must b publicly prosecuted... no mercy.. no mercy at all... let
promoters of terrorism have first hand experience

..and so it started a comment-war... I'll name one guy A and the other B
and some others C and D. Note that all of these are totally non-violent,
ordinary, nice, pleasant folk in their regular lives.

The myth of leadership

Expressed by a friend on FB :

True test of leadership is when you are confronted with problems. Seriously disappointed with the reaction of a person who I thought had it to become a great leader. Every time there is a problem, rather than looking at a solution, the first reaction is of hiding behind the wall of blame game..blaming everything but self :( # disappointed

My comment:
i've had a similar letdown 3 yrs back. since then, realizing and internalizing that everyone is human and fallible... the myth we build up of leadership is just dehumanizing. The leaders who take it to their head.. well, they can't admit making mistakes later on.

And it's also unfair to those seen as leaders. I recently witnessed a wonderful friend of mine get a lot of undeserved hatred from a follower because they just could not comprehend that this person who they see as leader of the group is a human, has several different things going on in life and will not "be there" for that particular group all the time.

We can't specialize & outsource leadership to any individual... that whole concept is false. it has to be worked upon inside us.

If you want a healthy life, you have got to eat healthy food.

Cancer in a Can: The Shocking True Story of how Pringles are Made

I hope you do read the article linked above; but even if you don't, I'd like to make a point : We should not have to even come to that.

If authorities across the world were really worried about food shortages, then the first thing to do is to shut down the entire junk foods / processed foods industry, like chips, kurkure, soft drinks, biscuits etc. Yes, soft drinks as well, all of them. They use loads of SUGAR. Guess which is one of the most water-intensive crops? And guess which planet's limited groundwater reserves are being used for soft drinks??

These multi-billion dollar industries are not feeding any hungry people, and are growing their ingredients on vast amounts of land that would otherwise have been used to grow real food to feed people. In the process, by dealing in bulk, they are causing monocropping over huge lands which makes use of fertilizers, pesticides and excessive water consumption inevitable. The lands they use then lose their fertility over time, ending up into wasteland that won't feed any people even long after these companies have left.

This group of students is doing an India-Pakistan peace cycle yatra (they will cycle through the border to Pakistan). They have been cycling from Kannyakumari, reached Pune yesterday evening (2 July) and will be coming thru Mumbai on 5/6 July.

Amazing journey they've had... please pass the cell numbers mentioned to any mediaperson you know. 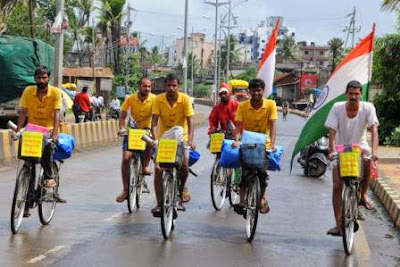 What it's all about

Thought for the day : It's not about defeating the polluters, the
imperialists, the fascists, the police state, the corrupt rulers, the
banksters, the petro oligarchs, the corporatocracy, the monopolizers,
the enslavers, the distractors, the patriarchs, the narrow mindsets,
the control freaks, the cynics, the pessimists, the whatevers.

It's about leaving them behind.

(Inspired by a quote from Dr.Steven Greer, shown in the documentary
movie SIRIUS.)
Posted by Nikhil No comments:

The best tactic for survival?

Sharing something that's caught my fancy recently. I've attached a screenshot of an online forum conversation I found shared on facebook,


...revolving around a computer game that was started on a computer server and left to run, with computer players (bots) fighting each other in a teamless deathmatch (meaning your goal, to win the game, is to kill everyone else and remain the last one standing). The game has an Artificial Intelligence program that would experiment and analyse the best tactics for survival, picking the best ones with each successive game.

Well, in the forum conversation, the person who started this game off to run on its own, forgot about it for 4 years and now checks back in, anticipating some highly skilled gameplay. Instead, he finds out that all the bots were NO LONGER FIGHTING EACH OTHER.

Read the conversation in the screenshot.. very interesting! As one contributor posted..
"The ultimate survival strategy developed over 4 years :  nobody dies if nobody kills. They've achieved something we couldn't. World Peace."

What freaked me out was when the server's owner joins the game to check what's wrong, all the bot players are rotating to look at him, showing that the game program hasn't crashed or gotten stuck. They're all voluntarily choosing not to fight.

There's not enough conclusive evidence here.. I wonder if this experiment can be repeated anywhere? Even so, this has given me a lot to think about.

Just googled it.. seems to have made quite some news stories:
http://www.huffingtonpost.co.uk/2013/07/01/quake-3-arena-world-peace_n_3529082.html?utm_hp_ref=uk (I feel the article draws an erroneous conclusion in the end, so please read the original screenshot and draw your own inferences)

PS: apologies for language in the screenshot...

Stop falling for the trap of demanding more & more regulation.

Regulation hampers small, local businesses while keeping loopholes open for bankers and big industry. Naturally it leads to system instability because the money is draining out.

Contrary to most assumptions, Globalization in its most destructive forms today is heavily dependent on govt subsidies and active govt intervention to protect big industries. A real free market system will KILL big industry.

This lecture by Michael Shuman from Post Carbon Institute brings it out : http://www.youtube.com/watch?v=jRwnx9wLEAE

Here's a good source for news and information regarding globalization vs localization & real economics : https://www.facebook.com/TheEconomicsofhappiness