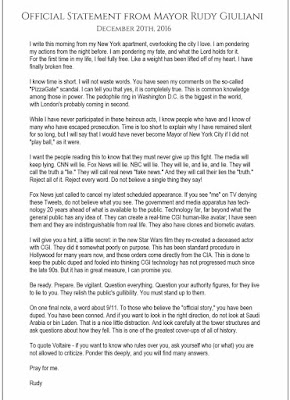 As the excitement runs its course and gives way to clearer thinking, more and more articles are coming out now that are putting serious questions to previous and current grandiose declarations and assurances surrounding the Demonetization move. Sharing two such articles on digital / cashless economy issue. Enthusiasts for cashless economy, digitization-of-everything might need to eat some humble pie.

http://www.sundayguardianlive.com/opinion/7629-don-t-forget-danger-digital-black-money
Don't forget the danger of digital black money
A quote from it : Digital platforms offer masking, scale, automation and remote operations, something cash cannot ever provide. It is, therefore, a dream come true for black money hoarders, terrorists and organised criminals. The combination of virtual accounts and anonymising money transfers creates unprecedented opportunity to launder and hide black money.

(emphasis added by me)
And another article serves as a valuable predecessor to it, published just 2 weeks prior to the demonetization announcement:
http://www.sundayguardianlive.com/opinion/7100-pm-modi-must-protect-india-s-banking-system-hack-attack
PM Modi must protect India's banking system from 'hack attack'

Quote from there: With the government reportedly placing the Consolidated Fund of India within the ambit of such technology "disruptions" by the NPCI, a non government public company, the questions are  not only of conflict of public and private interests, but even more seriously about not how but when will India in the grip of compromisable technologies witness a cyberwar that will destroy the banking and financial system in minutes.

It's worth noting that this author isn't from the anti-BJP side at all, heck he's been an adviser to the Goa BJP govt! See his credentials:

Dr Anupam Saraph, a professor, future designer and former governance and IT adviser to former Goa Chief Minister Manohar Parrikar and the Global Agenda Councils of the World Economic Forum

I can't believe the collective stupidity in assuming that influential black money hoarders will EXCHANGE their notes behind closed doors. You don't exchange money behind closed doors. You STEAL it. Especially when it's being printed out of thin air without constant public tracking of how much is being printed, where it's being dispatched etc.. without adequate mechanisms to catch out cash that goes missing in transit from RBI to banks. 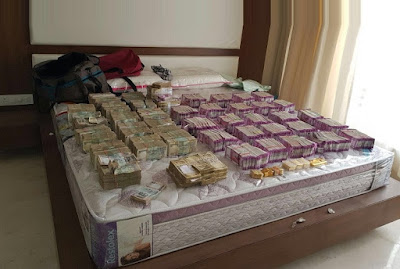 sample pic of IT-raids going on where large stashes of new notes are being confiscated, from http://www.thenewsminute.com/article/while-you-were-waiting-queues-these-bureaucrats-were-caught-rs-47-crores-new-notes-53708

Ref link:
http://indianexpress.com/article/india/after-one-month-of-demonetisation-several-crores-worth-of-cash-seized-long-queues-outside-atms-4420098/
>> see the cases, the circumstances.. they're more ripe for outright stealing the new notes rather than exchanging them with old ones. Do you seriously expect the operators here to take double high risk : in getting the new notes out AND getting equal value of older notes in?? That too the latter would only happen AFTER a supposed transaction. So anyways for any exchange to happen behind closed doors / away from the bank counters, the new notes would primarily have to be taken away. Why would the operator bother breaking back in to put old notes? And he'd have to put them in another place, where the old notes are. And one can't easily explain this away in the accounting system. Much easier to simply burn them off and move on.

A few meme jokes on #Demonetization 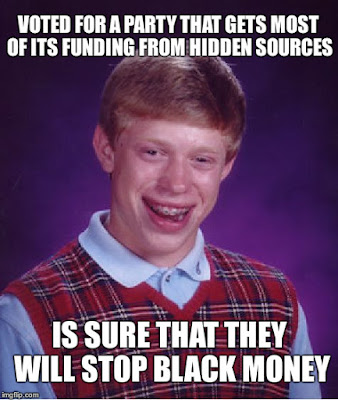 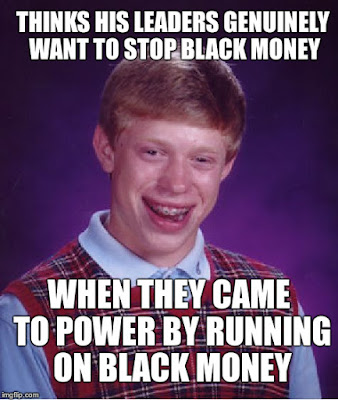 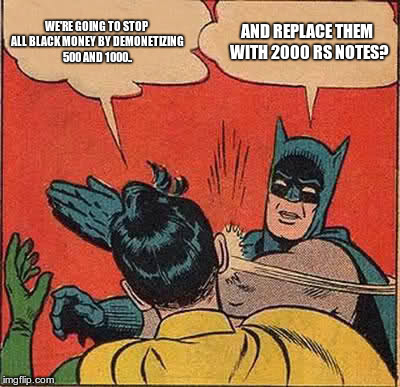 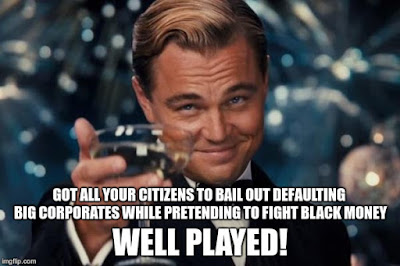 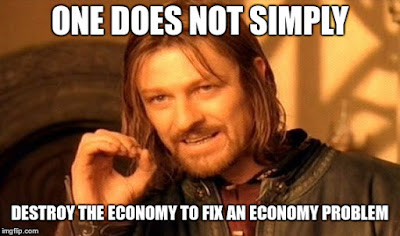 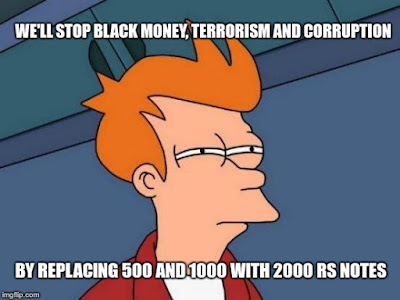 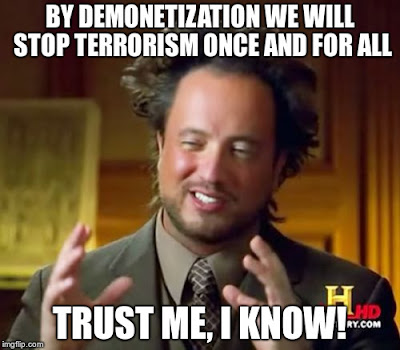 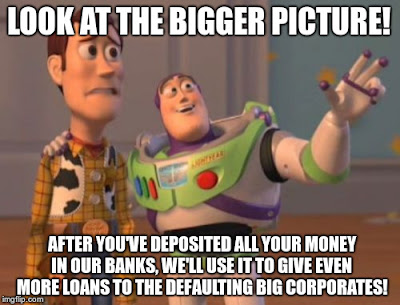 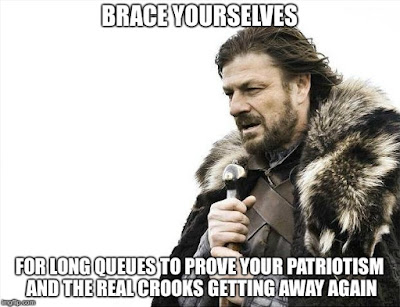 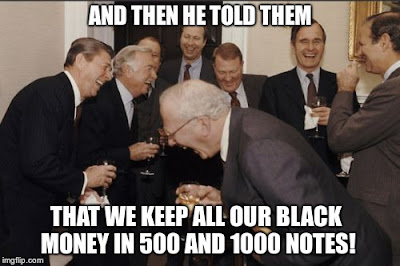 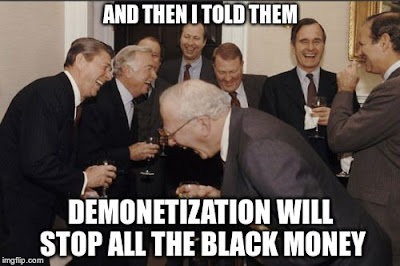 Update: Found an awesome one shared by others on FB: 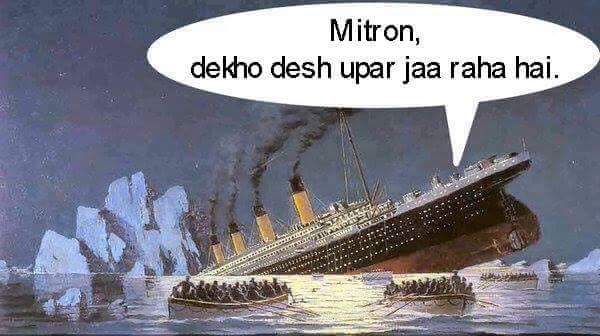 Fw: Open letter to PM Modi from a single mother of three #Demonetization

This was shared by a friend on facebook, who is the author. Keeping identity anonymous to protect the lady from the bhakts.

I voted for you. Because I *wanted change*.

Now I am confused because I have *no change* for the two thousand rupees you have given me.

I am a *single mother* of three trying to work and balance home.
I had fifty thousand rupees of *my hard earned money* at home for emergencies on the day *you declared them waste paper*.

This was *not black money*. This was money I had earned and *worked hard and saved.*

Elated with my money I went to the milk stall.
The man very curtly told me if you have change buy the milk because I have no change
He showed me his own two thousand rupees notes he got from the bank.
These are useless he grumbled

I went to my favourite vegetable vendor
She had very few vegetables
What happened I asked her
She said she had very little money to buy vegetables
Then she looked at me warily and asked, Memsaab you will give me change for the vegetables?
I have no change

I looked at the two thousand in my hand and said I have this
She removed her two thousand and showed me. I also have only that.

No milk no fruits for the kids today

My head was throbbing I went to the chemist.
A board greeted me
We will accept only hundred rupees.
We accept higher denomination currency only if you use the complete amount with us

Instead of the usual surly, Kidhar jaana hai he belted out, Choota hai to baitho.
I showed him my two thousand rupees he showed me his

I started walking home
Tired I reached home
Gave the kids bread butter and water
They looked at me puzzled, Mom why we don't have proper food today? they innocently asked.

I showed them the crisp new two thousand rupees

This is Monopoly money? The young one asked innocently .

Yes it is, I replied because it can buy only imaginary goods

Called the boss. Asked for a leave next day
He said, why? Did you not get to exchange your money
I said, Yes but it was no use the crisp notes were useless anywhere I went
So what will you do with another leave he said. They will still give to another two thousand rupees.

I said, no one seems to be protesting this arbitrary decision.

It's us the common folk who are bearing the brunt of this abrupt change Modiji thought of.
I can't use my own money, old or new.
Can you imagine how many like me are there in this country who are so badly hit by this.

My boss was quiet.
Where are you staging the protest?
I will join you.

>> again, I'll remind the casual arguer : You're challenging a single mother of three kids to prove her patriotism to you by standing in long queues.. for getting more useless pink notes that she has already stood in line for. Go cashless? My father and brother recently got cheated by PayTM's "cashless" solution twice in a row; the money they transferred never reached the shopkeepers whom we know well and trust to not be frauds. PayTM is just not responding.

Update, 11.12.16: Check out this article. Could the story above be a consequence of this..
https://www.thequint.com/india/2016/11/16/printing-of-rs-100-notes-stalled-as-focus-shifts-to-rs-2000-rs-500-notes-demonetisation-black-money-rbi-currency-ban
Printing of Rs 100 Notes Stalled as Focus on Rs 2,000 and Rs 500
... "The Reserve Bank of India’s preoccupation with printing the new Rs 2,000 and Rs 500 notes has almost completely stopped the printing of Rs 100 notes – at this point in time, the most sought after currency – leaving the country staring at a potentially huge financial and economic crisis."
Posted by Nikhil No comments:

Seeing contours for a location

1. Go to http://www.gpsvisualizer.com/map_input
2. If you have a .kml of your chosen location, upload it. If it's in another format, you can use geojson.io or mapshaper.org to convert it to .kml or .gpx.
3. If you don't have any file, find your lat-long location and type it into the given textbox in the way they've instructed.
4. Click on "Draw the map" button. In the window that opens, change the map layer to "OpenTopoMap" or "OpenCycleMap". They show the contours with height in meters.
5. Go back to the Make page and change the settings, like width n height default zoom level etc to get the map you want.
6. There will be a link to download the page showing the map to your computer, so you can just open in next time (still needs net) without having to enter all these parameters.

Printing / Taking large screenshot:
1. Do this on Firefox browser; Chrome doesn't have this feature yet.
2. Create your map with larger width and height, and high zoom level. Through trial and error, adjust these to get just the right large map window (use scrollbars to move in it) that shows all of your area at the zoom that you want and you don't need to click-drag the map.
3. Now screenshot the entire window (including the portions out of view). Press Shift+F2, a command console opens at the bottom. Type in this command:
screenshot --fullpage

4. The screeshot is saved either in the downloads folder of your device, or it asks you where to save it and what name to give.

Email ThisBlogThis!Share to TwitterShare to FacebookShare to Pinterest
Labels: how to

A LOT has been happening this month!