The real telecommunications revolution is yet to come

Q: What are some defining characteristics that have made mass media such a problematic thing today, from newspapers to radio to TV and to a degree even the internet?
A: It's a one-way medium. The feedback routes are very few and very difficult. Look at control systems theory : any system that doesn't have a robust feedback mechanism, is bound to fail.

And this hasn't come about naturally, our Governments specifically want them to be centralized and one-way. Recall the whole drive to shift from cable-operator TV to direct-to-home satellite TV? Aside from being a revenue multiplier for the broadcasters, there was a another purpose they served for the governments. Back when we did have cable TV, there used to be local channels, among just that network, where we got to see movies and also a lot of local news. I remember seeing some local function being telecast live over cable! These could have evolved into important points for exchanging local information and ideas. But that localization was broken to make way for standardized broadcast through satellite, hence placing this medium in govt influence.

The licensing restrictions on print media also made newspapers more centralized than decentralized. And radio toh.. thanks to some old laws still in place, India doesn't allow any political discussion over national or community radio. Even citizens' frequencies are not there, in which citizens could directly communicate with one another. (There was such a scandal over spectrum allocation, 2G etc, you'd think we'd stumble across this gaping fact!). 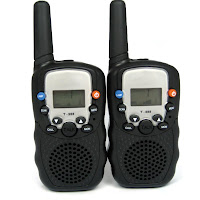 Then coming to mobile communication : The devices you carry today are supposed to be several generations more advanced than the basic radio sets being used just a few decades ago. So how is it that when a natural calamity strikes and takes out the mobile companies' towers, your cellphone becomes useless? (well, you can play angry birds while waiting for the roof to collapse over you, but not much else) A decades-old walkie-talkie in its place could help you communicate without a grid network. There is a purpose behind the way technology has been designed over the last decade or to : Even with the capability being there, decentralized communication is not allowed, by design.

Example: http://thinkprogress.org/climate/2013/09/13/2617361/biblical-rainfall-colorado/
"Three towns, Lyons, Estes Park and Jamestown, were totally isolated by water and cascading rivers. Lyons lost power and Estes Park lost telephone lines and cell tower service. The only way residents could speak with the outside world was through ham radio."

So, if you've ever thought, with all the communication technologies at hand, why aren't the solutions getting around as much... well, this is why. The communications technologies of today are crippled to be centralized, one-to-many or one-to-one channels. Many-to-many, with any kinds of connections happening in between, as glimpsed on the internet (which also to a large extent is still centralized), is yet to make its foray.

The real telecommunications revolution is yet to come; and it's going to be characterized by free, person-to-person and group-to-group communication, not bound by any centralized channels of control. It's most visible event will be the downfall of all the major telecommunications companies that today make huge profits from this industry. It will combine the sophistication of the internet with the basic portability and simplicity of a walkie-talkie. Any person will be able to communicate with any other person, unbound by pricing structures and out of reach of any middleman. It will be resilient enough to work effectively in the most serious of crises even with most of the infrastructure gone.

It will be opposed, of course, tooth and nail, under the guise of security. A truly decentralized network cannot be monitored, and the control structures will never want that. The default objection will be, as always, terrorism, that bad people will be able to communicate with each other effectively. This is an old school excuse that has long passed its expiry date. Look at the Mumbai terror attacks. The attackers communicated perfectly well with each other in spite of our centrally controlled grids : they were using satellite phone well outside of any jurisdiction! The criminal powers will always find ways to circumvent any safeguards. What we don't factor into the equations here is that with a decentralized model, the PEOPLE who outnumber any terrorists by millions to one, will be several times more empowered to ward off any threats. The top-down control structures cannot justify their legitimacy, resource hogging and control in an environment in which the people can protect themselves, so it is actually against their best interests to have true security. They would rather keep us all dependent on them. They say they are doing this and that for your protection; all they really want is to control and suppress you. When a real threat event does occur, at times of true crisis, all the protection promises will be broken as we have been witnessing again and again.

But this decentralization of communication, and with it of every sector imaginable, is going to happen, whether they like it or not. Fear needs to be let go of; imagination needs to be nurtured in the times to come.
Posted by Nikhil

That was informative. Keep up the great work.
catamaran stock