BIG revelation on the GM Foods debate : a former GMO supporter has become whistle-blower and written an article that you SHOULD read if you ever believed the mainstream media drill that GM foods have been "tested to be safe". They didn't tell you tested by whom and how, did they?

Former Pro-GMO Scientist Speaks Out On The Real Dangers of Genetically Engineered Food
By Thierry Vrain
I retired 10 years ago after a long career as a research scientist for Agriculture Canada. When I was on the payroll, I was the designated scientist of my institute to address public groups and reassure them that genetically engineered crops and foods were safe. There is, however, a growing body of scientific research – done mostly in Europe, Russia, and other countries – showing that diets containing engineered corn or soya cause serious health problems in laboratory mice and rats.
I don’t know if I was passionate about it but I was knowledgeable. I defended the side of technological advance, of science and progress. 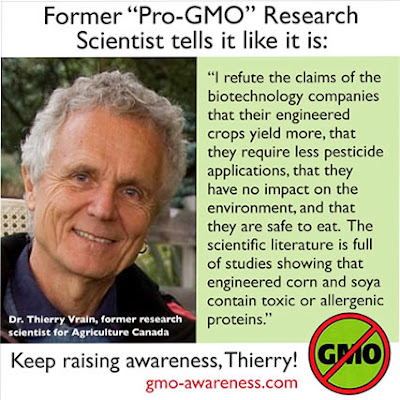 In the last 10 years I have changed my position. I started paying attention to the flow of published studies coming from Europe, some from prestigious labs and published in prestigious scientific journals, that questioned the impact and safety of engineered food.
I refute the claims of the biotechnology companies that their engineered crops yield more, that they require less pesticide applications, that they have no impact on the environment and of course that they are safe to eat.
There are a number of scientific studies that have been done for Monsanto by universities in the U.S., Canada, and abroad. Most of these studies are concerned with the field performance of the engineered crops, and of course they find GMOs safe for the environment and therefore safe to eat.
Individuals should be encouraged to make their decisions on food safety based on scientific evidence and personal choice, not on emotion or the personal opinions of others.
We should all take these studies seriously and demand that government agencies replicate them rather than rely on studies paid for by the biotech companies.
The Bt corn and soya plants that are now everywhere in our environment are registered as insecticides. But are these insecticidal plants regulated and have their proteins been tested for safety? Not by the federal departments in charge of food safety, not in Canada and not in the U.S.
There are no long-term feeding studies performed in these countries to demonstrate the claims that engineered corn and soya are safe. All we have are scientific studies out of Europe and Russia, showing that rats fed engineered food die prematurely.
These studies show that proteins produced by engineered plants are different than what they should be. Inserting a gene in a genome using this technology can and does result in damaged proteins. The scientific literature is full of studies showing that engineered corn and soya contain toxic or allergenic proteins.


Genetic engineering is 40 years old. It is based on the naive understanding of the genome based on the One Gene – one protein hypothesis of 70 years ago, that each gene codes for a single protein. The Human Genome project completed in 2002 showed that this hypothesis is wrong.
The whole paradigm of the genetic engineering technology is based on a misunderstanding. Every scientist now learns that any gene can give more than one protein and that inserting a gene anywhere in a plant eventually creates rogue proteins. Some of these proteins are obviously allergenic or toxic.
I have drafted a reply to Paul Horgen’s letter to the Comox Valley Environmental Council. It is my wish that it goes viral as to educate as many people as possible rapidly. Any and all social media is fine by me. This can also be used as a briefing note for the councilors of AVICC or anywhere else. Thank you for your help. [Click here for original source with replies from Dr. Paul Horgen]
— Thierry Vrain, Innisfree Farm

I am turning you towards a recent compilation (June 2012) of over 500 government reports and scientific articles published in peer reviewed Journals, some of them with the highest recognition in the world. Like The Lancet in the medical field, or Advances in Food and Nutrition Research, or Biotechnology, or Scandinavian Journal of Immunology, European Journal of Histochemistry, Journal of Proteome Research, etc â€¦ This compilation was made by a genetic engineer in London, and an investigative journalist who summarized the gist of the publications for the lay public.
GMO Myths and Truths – an evidence based examination of the claims made for the safety and efficacy of genetically modified crops. A report of 120 pages, it can be downloaded for free from Earth Open Source. “GMO Myths and Truths” disputes the claims of the Biotech industry that GM crops yield better and more nutritious food, that they save on the use of pesticides, have no environmental impact whatsoever and are perfectly safe to eat. Genetic pollution is so prevalent in North and South America where GM crops are grown that the fields of conventional and organic grower are regularly contaminated with engineered pollen and losing certification. The canola and flax export market from Canada to Europe (a few hundreds of millions of dollars) were recently lost because of genetic pollution. Did I mention superweeds, when RoundUp crops pass their genes on to RoundUp Resistant weeds. Apparently over 50% of fields in the USA are now infested and the growers have to go back to use other toxic herbicides such as 2-4 D. Many areas of Ontario and Alberta are also infested. The transgenes are also transferred to soil bacteria. A chinese study published last year shows that an ampicillin resistance transgene was transferred from local engineered crops to soil bacteria, that eventually found their way into the rivers. The transgenes are also transferred to humans. Volunteers who ate engineered soybeans had undigested DNA in their intestine and their bacterial flora was expressing the soybean transgenes in the form of antibiotic resistance. This is genetic pollution to the extreme, particularly when antibiotic resistance is fast becoming a serious global health risk. I can only assume the American Medical Association will soon recognize its poorly informed judgement.
In 2009 the American Academy of Environmental Medicine called for a moratorium of GM foods, safety testing and labeling. Their review of the available literature at the time noted that animals show serious health risks associated with GM food consumption including infertility, immune dysregulation, accelerated aging, dysregulation of genes associated with cholesterol synthesis, insulin regulation, cell signaling, and protein formation, and changes in the liver, kidney, spleen and gastrointestinal system. Monsanto writes “There is no need to test the safety of GM foods”. So long as the engineered protein is safe, foods from GM crops are substantially equivalent and they cannot pose any health risks.” The US Food and Drug Administration waived all levels of safety testing in 1996 before approving the commercialization of these crops. Nothing more than voluntary research is necessary, and the FDA does not even want to see the results. And there is certainly no need to publish any of it. If you remember 1996, the year that the first crops were commercialized, the research scientists of the US FDA all predicted that transgenic crops would have unpredictable hard to detect side effects, allergens, toxins, nutritional effects, new diseases. That was published in 2004 in Biotechnology if you recall seeing it.
I know well that Canada does not perform long term feeding studies as they do in Europe. The only study I am aware of from Canada is from the Sherbrooke Hospital in 2011, when doctors found that 93% of pregnant women and 82% of the fetuses tested had the protein pesticide in their blood. This is a protein recognized in its many forms as mildly to severely allergenic. There is no information on the role played by rogue proteins created by the process of inserting transgenes in the middle of a genome. But there is a lot of long term feeding studies reporting serious health problems in mice and rats. The results of the first long term feeding studies of lab rats reported last year in Food and Chemical Toxicology show that they developed breast cancer in mid life and showed kidney and liver damage. The current statistic I read is that North Americans are eating 193 lbs of GMO food on average annually. That includes the children I assume, not that I would use that as a scare tactic. But obviously I wrote at length because I think there is cause for alarm and it is my duty to educate the public.
One argument I hear repeatedly is that nobody has been sick or died after a meal (or a trillion meals since 1996) of GM food. Nobody gets ill from smoking a pack of cigarette either. But it sure adds up, and we did not know that in the 1950s before we started our wave of epidemics of cancer. Except this time it is not about a bit of smoke, it’s the whole food system that is of concern. The corporate interest must be subordinated to the public interest, and the policy of substantial equivalence must be scrapped as it is clearly untrue.
Thierry Vrain is a former research scientist for Agriculture Canada. He now promotes awareness of the dangers of genetically modified foods.
Originally published in: Prevent Disease.


Thanks for Healthy Blog..

Thanks for writing this blog
New Food Product Development

Your blog posts are more interesting and impressive. I think there are many people like and visit it regularly, including me. I appreciate your own position and I will be sure to come back here.

Good tips to find the best embroidery digitizing service provider nowadays. It is hard to find but thanks to your tips. Keep it up...! Thanks.